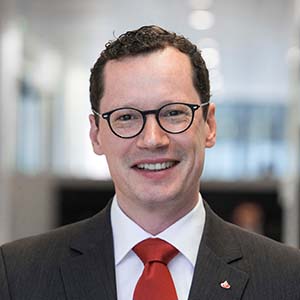 Sebastian A. Fairhurst is Head of Public Policy of Santander in Germany. He joined Santander in 2012 and is in charge of public policy and sustainability issues for Santander in Germany. Before taking up the position at Santander, Mr Fairhurst was Secretary General of the European Financial Services Round Table (EFR; www.efr.be) whose Members are Chairmen and Chief Executive Officers of major European banks and insurers. Mr Fairhurst started his career in 2000 as head of office of Ms Erika Mann, Member of the European Parliament, covering issues related to transatlantic relations, international trade, telecommunication, data protection, intellectual property, and competition. Mr Fairhurst studied law and philosophy at the Universities of Saarbrücken and Regensburg in Germany. After the second state exams in law in 1999 he absolved a masters in international and European law (LL.M.) at the VUB in Brussels. Mr Fairhurst is Young Leader Alumni of the American Council on Germany and the Atlantik-Brücke (2004) and Responsible Leader of the BMW Foundation. He is co-founder of the network “Brussels in Berlin”. Mr Fairhurst published several articles for journals and books on European law.